I learned to embrace the lies at an early age. I don’t know if it came from being a tender-hearted girl, or if I was just a sucker to want to fit in, oh . . . .from kindergarten on.

From being pushed around in second grade, and bullied throughout elementary school, I was certain there had to be some way I could fit in. I just needed to discover that secret key to unlock popularity. Or at least acceptance.

Believe me, I tried. It didn’t help the day I wore a pair of plaid pants Mom bought from a used clothing store . . . and a boy in my fifth-grade class wore the exact same pair.

Or when I had the “privilege” of getting the assignments to the cool girl who was home with chickenpox. She gave me a necklace with my name on it. Misspelled. But it was from her! Surely, that meant I was on my way to fitting in.

It didn’t help that I had a singing voice and she didn’t. Or that I had some athletic ability . . . when I wasn’t too worried about messing up.

Which happened far too often.

That craving to fit in drove my every decision as a young person.

I attended a different junior high than those girls. But our elementary school held a fair every year. In eighth grade, I decided to go. I found my classmates, who had all grown prettier, and seemed as confident as ever. I hung around with the group of girls.

I followed. Laughed at the right times. Walked alongside, not sharing too much . . . afraid I’d say something stupid. It seemed like they were finally accepting me.

We headed to the bathroom. They all exited before me. When I caught up to the group, the cool girl said, “Let’s ditch Clanahan—” and then she turned. Saw me.

And an unbearable silence blanketed that little clique of girls.

Shame seared through me. It didn’t matter that I’d tried so hard. That I had worked to be just like them.

I would never fit in.

When the grown up version of mean-girls made me feel less-than at my job, it just confirmed the message those mini-version-mean-girls conveyed.

I was truly less-than.

In my heart, what I craved most was to be seen, acknowledged as having value for who I was as a person.

Those moments scrape away the essence of who God created us to be, and leave bloodied sores.

They eventually scab over.

Turn to scars, wrinkling the soft tissue of our hearts, pulling it tight.

And those scars form who we think we are.

Many of us carry these wounds into adulthood, wearing them like an invisible cape. Of course we’re not meant for intimacy with people. We swirl that cape around ourselves in protection. We’re not good enough to be part of deep-friend relationships.

God wants to brush His healing hand over those scars in our hearts. He wants to redefine how we see ourselves. He yearns for us to see the beauty He wove into the fabric of who we are.

He created us to live in the confidence that we are loved. By the God of the Universe.

Sometimes, we must acknowledge we’re broken before we can be mended. When an arm breaks, it takes time for the cast to do the work of resetting the bone.

So too with our self-concept. We see broken. Less-than. UGLY. 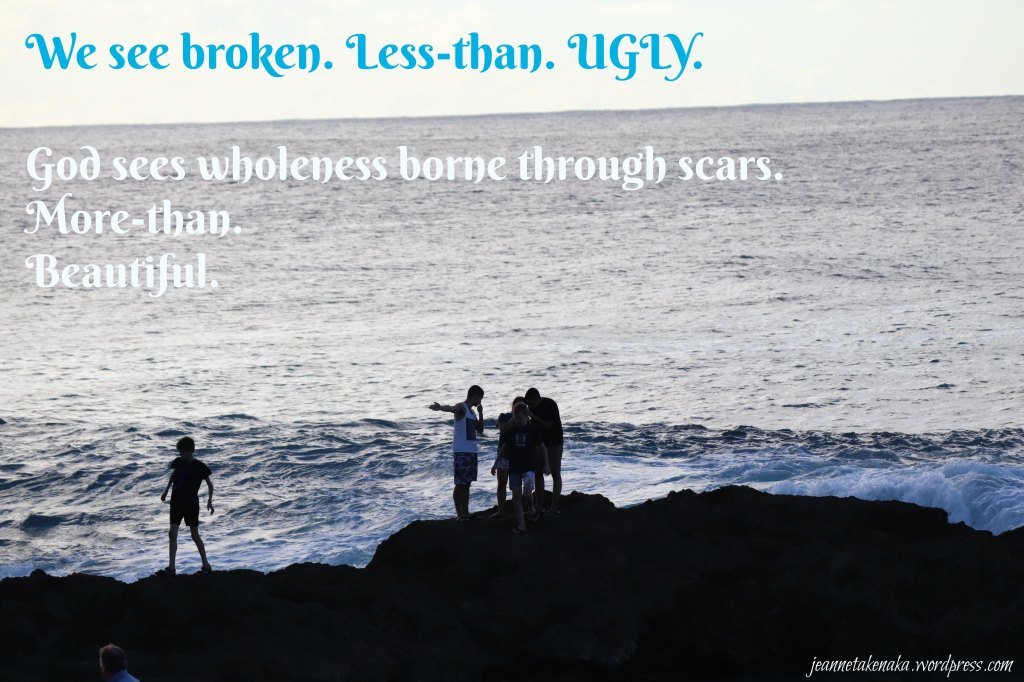 Healing happens over time. And it requires us to choose to trust God with our brokenness. As we allow Him to stitch together those gaping wounds with the thread of His love . . . the pain lessens.

When we trust Him with those wounds, the shame of the lies begins to lose its grip.

Sometimes we have to reframe our thoughts about God.

Where the mean people try to make us feel less-than, God says we are seen.

When people attempt to cut us down, or ignore us, God says we are significant. Loved with an everlasting love.

When we choose to view ourselves through God’s eyes as beloved, treasured? That’s when we begin to see the essence of Himself that He placed within us.

We don’t have to live with the distorted image the “mean-girls” inflicted upon us. We are daughters and sons of the Most High God. The loving Father.

We are not less-than. We are enough because we belong to Him.

What about you? What truths has God threaded into your heart about who you are in Him? How you deal with the unkind people in your life?

Here’s a song that has spoken to my heart:

I’m linking up with #RaRaLinkup, #TellHisStory, and Holley Gerth

37 thoughts on “Accepted: When We Want to Fit In”