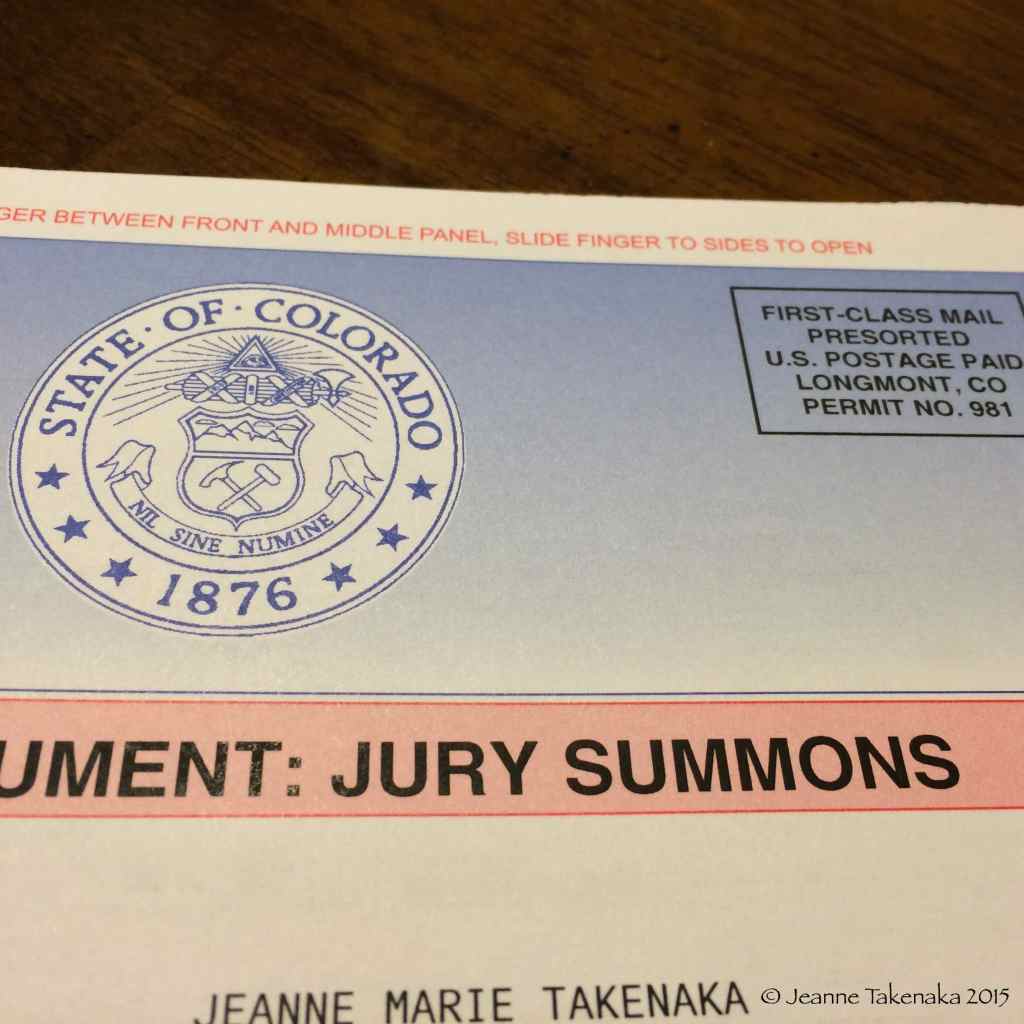 The day the pink and blue summons arrived, I cringed. What would I have to reschedule? I admit it. I was not excited about exercising this privilege we have as a result of living in the United States. I tempered my reaction because my boys were watching. Those boys of mine . . . they saw right through my, “It’s okay. It’s what we all get to do sometimes.” 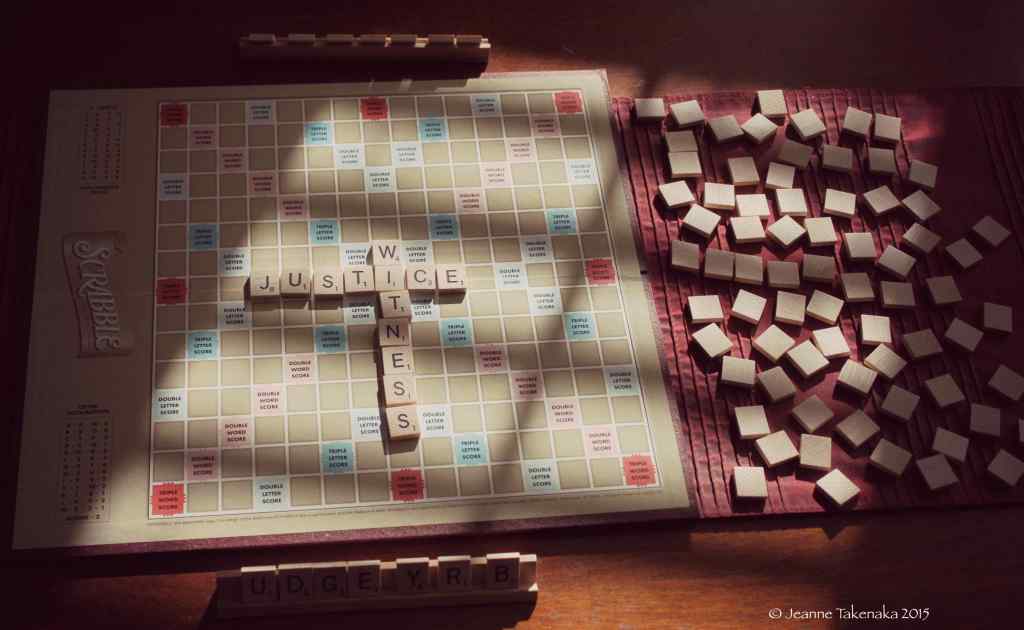 I reported Monday morning, with an iPad, a book . . . and a niggling feeling that I was going to end up on a jury. Distractions peppered my attempts to read as I waited. R. The process was fast-paced with an introduction and a thank you from a county judge. Tthen a video that explained more about jury duty. Shortly after that, juror numbers and names were called and people gathered into various-sized groups to be taken to a courtroom.

My hope of slipping through the morning, invisible, ended when “Juror number 21__, Jeanne Takenaka” boomed across the speakers. I took my questionnaire and my purse and joined the line forming in the middle of the room. We were led to a courtroom and given precise places to sit. For the next two hours, I listened to the lawyers’ comments and questions, and the answers of potential jurors. Before lunch, the thirteen of us still seated in the juror’s box were the jury. The trial was slated to go three days. “Oh joy,” was the response of most of the jurors.

I grabbed a quick lunch. We all returned to our assigned seats. And then the trial began. It was a much more subdued affair than I’ve seen on television.

What struck me most were these things:

1. We were deciding the fate of a real, living person,not some character on television. What this jury of his peers decided would determine the course of his life for years to come.

Lesson learned: Our words and choices can have lasting impacts on those around us. Especially in a legal setting.

2. This case wasn’t as cut and dry as some may have believed when we walked into the courtroom that first afternoon. Both sides did and said things that impacted the other. Some choices made were bad choices with lasting consequences.

Lesson learned: Don’t be quick to judge another. There are often underlying issues that must be considered before making a judgment—in the courtroom and in life.

3. Genuine bonds formed in a short time with people from very different backgrounds. We had two young men on this journey, some older men, six women, all of them professionals, and all middle-aged. One man was wheel-chair bound, and not excited to be there, but what a gentle spirit under the gruff exterior. We shared two days of our lives together.

Lesson learned: Common experiences can draw people together. Maybe it was knowing we were stuck in this situation together. I’d like to think we made some genuine connections, even though most of us will probably never cross paths again. 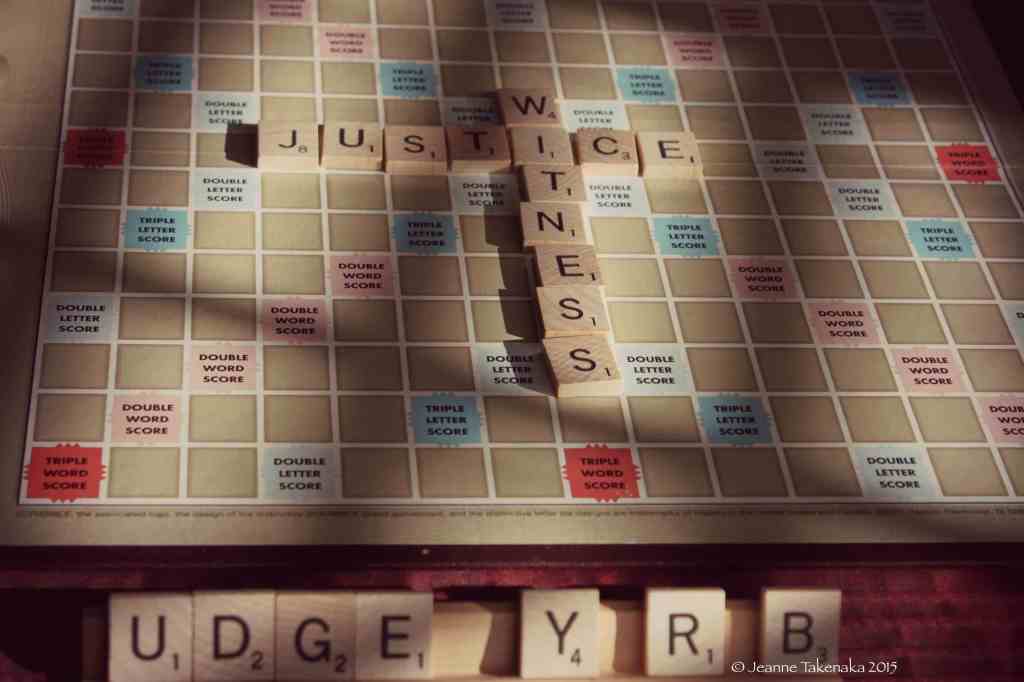 Lesson learned: It’s not easy to decide another person’s fate. Okay, maybe it is sometimes. But in this situation, where some details were incomplete or gray, knowing our decision impacted the defendant weighed on us.

5. I appreciated the demeanor of the judge and the lawyers. They were organized, professional, but also approachable. After the trial ended, they asked us for our feedback about how they could have done things better. They were level-headed and calm from beginning to end of the process.

Lesson learned: When in a position of power, humility and calmness go a long ways toward gaining respect and getting things done.

Though I’ve been summoned five times, this is my first opportunity to actually serve on a jury. Yes, it was an inconvenience on my schedule. But, I would do it again, if called upon. And I’d go into the situation with lots of prayer. We never know how our decisions will impact others.

What about you? What have your experiences been when you’ve answered the summons for jury duty? What lessons have you learned through the jury duty process?